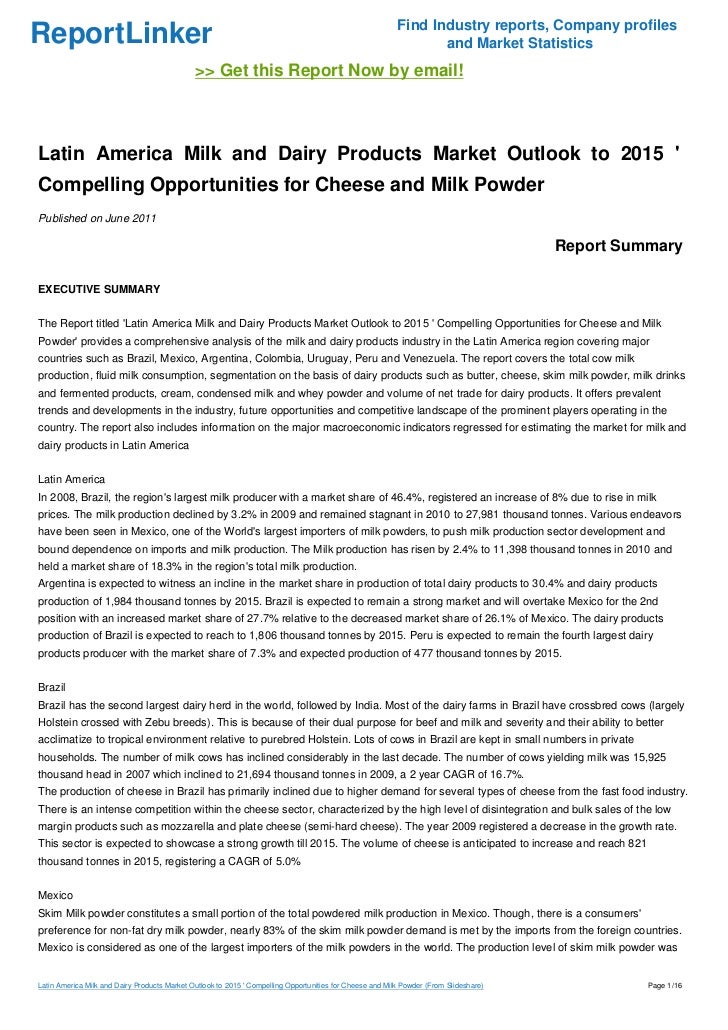 EXECUTIVE SUMMARYThe Report titled 'Latin America Milk and Dairy Products Market Outlook to 2015 ' Compelling Opportunities for Cheese and Milk Powder' provides a comprehensive analysis of the milk and dairy products industry in the Latin America region covering major countries such as Brazil, Mexico, Argentina, Colombia, Uruguay, Peru and Venezuela. The report covers the total cow milk production, fluid milk consumption, segmentation on the basis of dairy products such as butter, cheese, skim milk powder, milk drinks and fermented products, cream, condensed milk and whey powder and volume of net trade for dairy products. It offers prevalent trends and developments in the industry, future opportunities and competitive landscape of the prominent players operating in the country. The report also includes information on the major macroeconomic indicators regressed for estimating the market for milk and dairy products in Latin AmericaLatin AmericaIn 2008, Brazil, the region's largest milk producer with a market share of 46.4%, registered an increase of 8% due to rise in milk prices. The milk production declined by 3.2% in 2009 and remained stagnant in 2010 to 27,981 thousand tonnes. Various endeavors have been seen in Mexico, one of the World's largest importers of milk powders, to push milk production sector development and bound dependence on imports and milk production. The Milk production has risen by 2.4% to 11,398 thousand tonnes in 2010 and held a market share of 18.3% in the region's total milk production.Argentina is expected to witness an incline in the market share in production of total dairy products to 30.4% and dairy products production of 1,984 thousand tonnes by 2015. Brazil is expected to remain a strong market and will overtake Mexico for the 2nd position with an increased market share of 27.7% relative to the decreased market share of 26.1% of Mexico. The dairy products production of Brazil is expected to reach to 1,806 thousand tonnes by 2015. Peru is expected to remain the fourth largest dairy products producer with the market share of 7.3% and expected production of 477 thousand tonnes by 2015.BrazilBrazil has the second largest dairy herd in the world, followed by India. Most of the dairy farms in Brazil have crossbred cows (largely Holstein crossed with Zebu breeds). This is because of their dual purpose for beef and milk and severity and their ability to better acclimatize to tropical environment relative to purebred Holstein. Lots of cows in Brazil are kept in small numbers in private households. The number of milk cows has inclined considerably in the last decade. The number of cows yielding milk was 15,925 thousand head in 2007 which inclined to 21,694 thousand tonnes in 2009, a 2 year CAGR of 16.7%.The production of cheese in Brazil has primarily inclined due to higher demand for several types of cheese from the fast food industry. There is an intense competition within the cheese sector, characterized by the high level of disintegration and bulk sales of the low margin products such as mozzarella and plate cheese (semi-hard cheese). The year 2009 registered a decrease in the growth rate. This sector is expected to showcase a strong growth till 2015. The volume of cheese is anticipated to increase and reach 821 thousand tonnes in 2015, registering a CAGR of 5.0%MexicoSkim Milk powder constitutes a small portion of the total powdered milk production in Mexico. Though, there is a consumers' preference for non-fat dry milk powder, nearly 83% of the skim milk powder demand is met by the imports from the foreign countries. Mexico is considered as one of the largest importers of the milk powders in the world. The production level of skim milk powder was recorded at 25 thousand tonnes in 2009. It has inclined by over 100% from the level of 11 thousand tonnes in 2007. It is expected that demand for the skim milk powder will lead to a certain growth rate in the domestic supply. It is projected to increase to 3